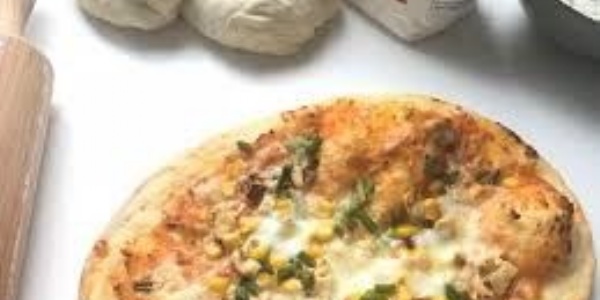 The toughest challenge yet!

“All you need are these ingredients!” he announced.

So then you went to your parents and asked if they could get the ingredients and they had a meltdown right? I can feel their anger and frustration from here.

THERE IS NO FLOUR OR YEAST IN THRAPSTON, RUSHDEN, OUNDLE, NORTHAMPTONSHIRE OR ENGLAND!!!

I went to five stores and found most of the shelves were well stocked (even the toilet rolls and pasta were there) EXCEPT FOR HOME BAKING where I could have bought a decorative icing kit and some hundreds and thousands – but they will not help me to make pizza!

So I returned home and turned out the cupboards, I found some bread flour (about 150g) and a jar of wholemeal flour and a tin of yeast. So we are good to go.

However I would like to apologise to your parents – asking them to buy the Crown Jewels, the Mona Lisa and the Bayeaux Tapestry would have been easier!

It may well be, that you have to wait a few weeks to get flour and yeast, in which case you can follow the recipe then. But if you did manage to get the ingredients, I have made 5 short (ish) videos which show the different stages. (It was 6 but one of the videos failed to record due to me being an idiot!)

Also I inevitably forgot to mention bits of important information in the clips like - “Don’t burn your hands!” so make sure you read the information on the blog as well as watching the film.

Step 1 - Making the regular and the gluten free dough.

As I mention in the film I have used wholemeal flour, which will do, but strong white bread flour makes a much tastier base.

The first health and safety point of note in the first film is when you pour in the hot water. You might want to get your parents to do this. Or if you do it, use a tea towel, especially if like me,  you are using a metal jug. The water does not have to be boiling, it can just be hot but most importantly, don’t pour it all in at once - pour it in stages.

You will notice at 6 minutes 37 it goes very quiet. This turned out to be saga number 2! When I sent the videos to Mrs Evans to be uploaded onto YouTube, this one was blocked on copyright grounds. In the background I had the song 'Rock Steady' by Aretha Franklin playing and YouTube decided not to allow it! Even though other songs are louder later in the filming! So Mrs Evans managed to mute the film for the duration of this song up until 9 minutes and 42 seconds. In this part of the film you don’t miss much. I’m just kneading the dough together in the bowl, sprinkling a bit of water to the loose flour to add to the dough and throwing leftover flour onto the work surface so the dough doesn’t stick.

I also tell you all my secrets so it was probably a good thing that the film goes quiet!

Step 2 - Making Your Pizza Base

The first thing you might notice is that my dough doesn’t appear to have risen! That is because that was take 2! It did rise (not as much as strong white bread flour would) but then I took it out, started kneading it and talking more and then I said something ridiculous, so I had to start again! I wanted to let it proof again, but it was getting late and we were getting hungry, so we had to make-do!

So I’ll tell you what I did.

The main thing to remember is with this gluten free dough is to use a regular oiled oven tray (without the holes the pizza tray has) and just spread the dough evenly over it.

When both bases are in their trays get a fork and prick little holes all over the base. This will stop the base puffing up when it is in the oven.

This film also showed me putting the pizza bases in the oven. I heated my oven to 225 degrees centigrade (I showed the reading on the oven thermometer, which would have demonstrated reading another scale!).

For this part, you might want to get your parents to help you putting the bases in.

The pizzas took 14 minutes to cook, again this time can vary so make sure you (your parents) check at stages to make sure they don’t burn.

Have fun and let me know how you got on. You could write an instructional text on what you did, you could send me a picture or you could just say that you did it.